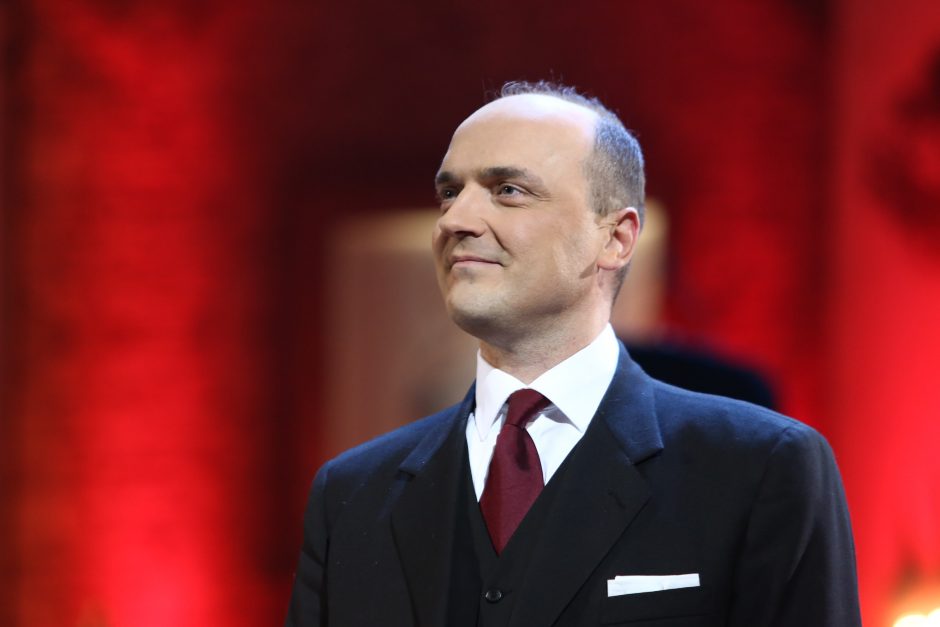 Forty-one-year-old Giedrius Drukteinis, a journalist, communication and business consultant, freelance columnist for FHM, Playboy, In Style and Business Class, an election observer in various missions in the Balkans, post-Soviet areas, Africa and Afghanistan since 1999, divides his life into two parts: his 20 years under Soviet rule, during which he published his first essay, entered Vilnius University and was conscripted into the Soviet marines (1988-1989); the second half of his life highlights graduating from Vilnius University in 1994, where he presented his first book, “Vietnam War,” as diploma work (he says it was the very first instance of a book being presented for a diploma in the history of the University).

Working as an advertising and public relations executive for different companies, he published his second book “Ulster, My Heart” in 1997, and the first edition of the third one – “Israel, a State of the Jews” – came out in 2005. His fourth book, “A Tie is Politics,” hit the bookshelves this year. With this bio he might be one of dozens of Lithuanian authors who endeavor tenaciously to the prominence of an abundance of scribblers. He has, however, managed to stand out not with the books and political campaign observations, but with his unlikely Web site for men, www.elegancija.eu, which sneers at Lithuanian men’s manners and styles, wittily chides men for their “national” vices and gives some good tips on how to behave well.

The Web site has gained public acknowledgment, catapulting Drukteinis to the most-read glitzy magazine sections as a respected men’s attire and behavior columnist. The Baltic Times sat down one-to-one with Drukteinis for an honest interview.

Honestly, I am among your numerous admirers who got hooked on your Web site. How do you explain that it, not a sex site, and not even a basketball portal, but a guide to true manhood, accrued its readership?

Unlike women, Lithuanian men do not have a lot to choose from – we do not have a well developed “beauty” industry, very few men’s magazines, as those on the shelves cover mainly cars and fishing, very rarely lifestyle or fashion. We have virtually no TV shows regarding men’s fashion, interests, challenges and problems. And last, but not least, in Lithuania men do not have historical traditions of glamour or being “stylish.” Therefore, any attempts “to fill the void” receives applauds of welcome, and some gain the public’s heed.

However, how do you venture to preach something that is so indefinite and personal to everyone – style, etiquette and fashion? Aren’t you afraid of being called a bit stuck-up, a phony person who seeks popularity by all means?

I am not such a person. I am neither a fashion and etiquette guru, nor a charlatan. The only reason why I started writing about it was that no one did it on a constant basis. The only thing I needed was a bit of commitment to those nearly daily columns. I am happy the Web site has been off to a great start. First, I see myself as a professional journalist, writer and author of four books, a public relations consultant, story-teller and a family man. I live with my family in Vilnius and I am lecturing at two universities and many colleges. From time to time, I work as an observer in Africa, Afghanistan and the Balkans.

How do you see the average Lithuanian male? How has he changed over the span of 20 years of Lithuanian independence?

Not to offend anyone, most often he is a tasteless and pretentious person. Currently our men, however, can afford more and have more choices, that is obvious. However, I would lie if I were to claim that Lithuanian men have become more stylish and manner-conscious over this span. Fashion-wise, yes, they indeed have become more fashion-conscious. But not style- or glamour-conscious. We still look bad. Usually three main reasons count here. First, we still allow our women – wives, mothers and girlfriends – to dictate our way of dressing, which is pretty dangerous as the women, obviously, perceive us differently than we ourselves. Second, we see young men in advertising or fashion shows, yet the young lads cannot afford the attire they are advertising – only mature men can afford those duds, meaning that a “fashion-conscious” subject puts on the clothes which were neither created, nor designed, for them. And, of course, we have never had our own style icons – no aristocracy, no sexy looking athletes, no flamboyant politicians or warlords. We follow the East, which, in turn, follows the West, and then we are lost somewhere between.

Do you pay attention to Lithuanian men who drive Lexus cars to the local A-class gym, wear Versace suits, but find it appropriate to wear 3-litas underwear and socks? What style is this?

Unfortunately, it is not a rarity. It happens more often than we might think, such a mismatch.
Underwear should not be seen, anyway, particularly sticking out from the pants. I call this style “practical.”

How does the average Lithuanian male’s wardrobe differ from a self-respecting Westerner’s?

Well, I can just guess how many of our people wear second-hand clothes, but those who can afford brand new stuff tend to buy too expensive and overpriced (as are many things in Lithuania) clothes. Unlike in the West, we dress to impress, not to express ourselves.

Are Lithuanian men good at flirting? What is needed to hook up with the girl from the first floor?

Definitely, we are NOT, for one simple reason: women have done everything to strip us of the knowledge. Gender equality, feminism and political correctness, along with stringent sexual harassment  laws, have turned this pleasurable love prelude – flirting – into longer relationships, or a passionate act of sex “on the table,” into “a mine field.” Lithuanian men do not know how to flirt because they do not know what kind of woman the female wants to be, and how she wants to present herself. In an emancipated woman’s eyes, a compliment given to her by a man is regarded as a “PR trick,” or a form of hoarse harassment, flowers given to a woman are an expression of being old-fashioned, a lack of money and are symbols of man’s status as a loser. An invitation for a stroll along the Neris river is not a romance anymore, but a waste of time. Therefore, while flirting, a Lithuanian man is obliged to keep silent, puzzling as to what kind of conversation topic might get the pretty girl interested, may talk a lot about himself, hiding an inferiority complex and mistrust in his low socio-economic status. Or, he might talk a lot about his cars, wealth and achievements. However, I am yet unsure whether these principles, upon encountering an average Lithuanian girl or the most eerie feminist, will work.

It sounds discouraging for many men. Have you come up with a list of traits and things that Lithuanian males are proud of?

I have, however the main question is whether the things impress anyone besides ourselves. First, here comes the brand new and powerful car which, most probably, belongs not to you, but to the bank. Besides, the car is old already from yesterday. The second on the list is the number of Facebook friends; however, so many males don’t have any real friend. The third on the list are the computer game achievements. However, men’s achievements in real life are in question. To continue, the fourth thing that really matters for many local men is the speed of the car they rev up in town or on the highway. Sure, how one follows the road rules and road signs might sound more important to some. The fifth thing that really matters is the smartphone. However, many men hush the fact that no one calls. Here our men should remember that the most important thing is not what you drink Champagne from, but with whom you indulge it. Then in the row to impress is the ability to quote movie heroes by heart. However, it just proves that many men watch them alone.

Is there anything more Lithuanians like to boast of?

Oh, yes, do you want me to continue?

This line-up irks me, I have to admit. Let’s quit here. Don’t you think it leads most men to a shaky relationship or, at worst, a quick divorce?

I am not sure how fast, or faster, divorce for Lithuanian men can be in, let’s say, Vilnius, where I, every day, go by an office which has in the windows the sign: “Fast and cheap divorce.” Although divorce is not something that is important to me, every time I got stuck in a traffic jam in the street next to a building, I tend to think about this fast and cheap divorce. With all my respect to proprietorship, I don’t think there exists such a phenomenon as a “fast and cheap divorce.” I reckon divorce can be neither cheap, nor fast, as a divorce means lengthy procedures. By the way, already ancient Jews knew this very well, stressing in their Talmud: “Stay married – divorce costs a lot.” I reckon divorce marks a person going through it, or having experienced it, makes the person worn-out, as if a piece of second-hand clothing from Western Europe in our second-hand store. And let my divorced male friends not get angry over these words, as we, who are married, stoking the furnace of passionate love, being the parental examples for our own children and posing for window-shop advertising creators, ought to be vexed over the words. If I could get any more serious, I comprehend that every time, people have millions of reasons to get separated, i.e break the marital vow “together till death separates us” in front of God, or the official from a local marriage bureau. According to statistics, half of all nuptials fall apart every year. I realize the high percentage of divorces is not something exceptionally attributive to Lithuanian couples, although the phenomenon, divorce, has reached Lithuania relatively recently, having pushed out the Roman tradition for people of authority to avoid divorce. By the way, divorce was a highly intolerable phenomenon not only for high-ranking Romans, but for the occupational regimes, like the Nazis’ or Communists’, as well.

National media pronounces Lithuanian men to be an endangered species due to female teachers’ dominating nurturing processes in our kindergartens and schools, and modified foods, which supposedly reduce testosterone, the male hormone, levels in pubescent boys’ blood. And now comes your gloomy outlook for our male peers. Do you reckon, in 50 years’ time, a Lithuanian man will be able to lift a 15-kilogram sword, or hunt down a mammoth for his kin’s dinner at a pagan bonfire?

I would not be so pessimistic. Media always loves to scare people, which is essential in story-telling. In spite of many men becoming weak and submissive, there is still a lot of space for tough and cool men. I bet your wife is proud of you, incarnating the best virtues of the Lithuanian male gene-pool.

Thank you. By the way, do you reckon Lithuanian women to be the prettiest in the world?

That’s a myth. Beautiful ladies are everywhere, even in England. I have seen many ugly Lithuanian women and plenty of gorgeous Latvian ladies. What’s the big deal? It’s just a matter of attitude.